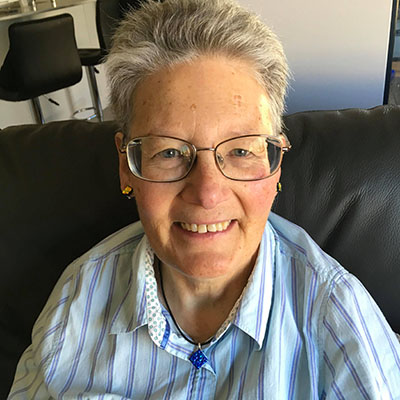 Sydney born, Adelaide raised - until I was twelve years old - whereupon my mother relocated us to the UK. On arrival in England I was promptly placed in a ‘good Catholic boarding school’.

At the age of 21, desperate not to have to endure another London winter, I returned home to the sun and surf of Sydney. Serendipity soon found me, much to my mother’s pride, following her footsteps and joining the honourable trade of bookselling. When I was told on my first day of work that management wanted staff who read, so they could recommend books to customers, I knew I had discovered the best job in the world.

Finally, however, my career caught up with me and I was forced to admit the truth of my book addiction. The epiphany arrived the day I was packing to move into yet another shared lesbian household, only to realise I had one small suitcase of belongings and five large crates of books.

Moving to Canberra in the mid-nineties, I met my life partner. After culling the three books we felt we could live without, my nine crates of books joined her seven crates of books. Over the years, our blended family has included a menagerie of horses, chooks, dogs and cats, some of whom have starred in very early unpublished short stories and thankfully, none of whom read.

Although I had never contemplated writing a full length novel, a very funny lunch with friends prompted the idea for “Times of Our Lives”. Mentioning to my partner on the way home that our fanciful lunch time discussions would make a great story, she turned to me and said “then write it.” Sixteen years later, after relocating through five different homes, four jobs, a move across the country and a huge amount of help, advice and encouragement from some wonderful friends, I finally finished my book. Without the support and encouragement of my amazing partner, I would probably still be hearing that voice in my head, nagging me to write down my story. It is, by far, the scariest venture I have ever undertaken; however, it is also the achievement that gives me the most pride.

After 10 years in the red dirt country of WA, late last year we finally saw our dream become reality, when we retired to our beautiful beach house on the coast. Here with the pristine beaches as inspiration, I am settling down to write my second book.